A strong contingent of Championship contenders met up for a weekend of Hillclimbing at Wiscombe Park on Saturday and Sunday.  The weather proved to be sunny on both days resulting in some great times being achieved. The day kicked off with the Roadgoing Series Productin Cars up to 1400cc which consisted of a large number of cars.  Amongst the drivers was our very own Martyn Davies in his Fiesta and Rebekah Edwards in her VW Lupo.  Both Martyn and Rebekah improved with each and every run, with Martyn taking 1st in Class with a 48.34, with Rebekah finish 9th with a 54.05. 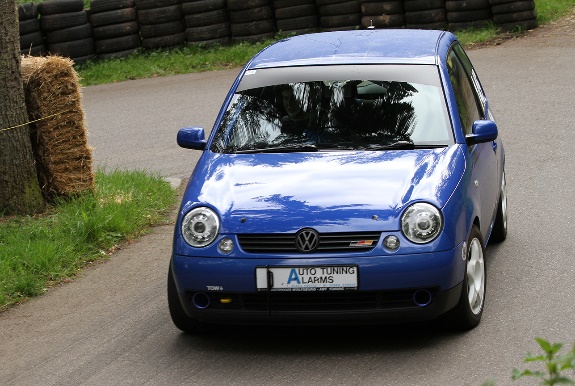 The next class to see WAMC Championship contenders race up the hill, was the Roadgoing Series Production Cars over 1800cc up to 2600cc, once again a large class of cars, 18 in total with 4 contenders entered (which was an amalgamation of two WAMC Championship classes > SC2 and 1B).  Due to Lyndon’s Honda not quite being ready, he brought out last year’s Championship Car (Renault Clio) and took the opportunity to get some driving time under his belt and joined the Roadgoing Series Cars. 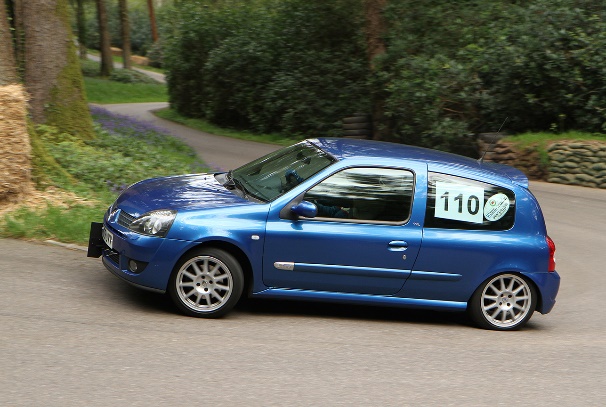 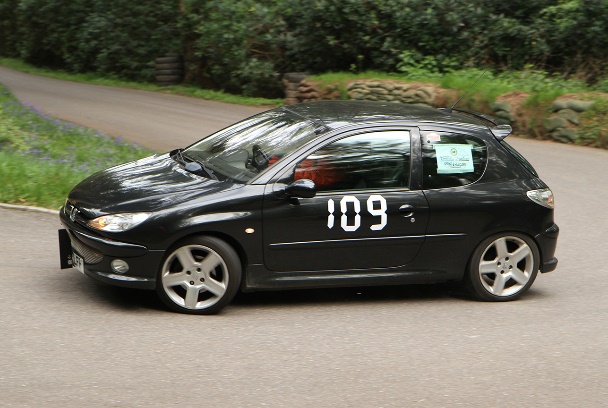 Within the class there was a tight battle between Rob Thomson in his Renault Clio and Gary Morgan in his Peugeot, through the day, with Gary slightly ahead of Rob on the morning Practice.  This was the first time for Rob to have driven the course, so he had to quickly learn the lines if he was to continue to keep on Gary’s tail or even try and pass him.  The day ended with Rob taking the win in the afternoon with a timed run of 49.71, with Gary followed very closed behind on a 49.75 !  Both Lyndon and Wynne Morgan put in a great time with not much between them either, Lyndon with a 50.71 and Wynne with a 50.99.  Out of a class of 18, we had a 9, 10th, 12th & 13th placement. 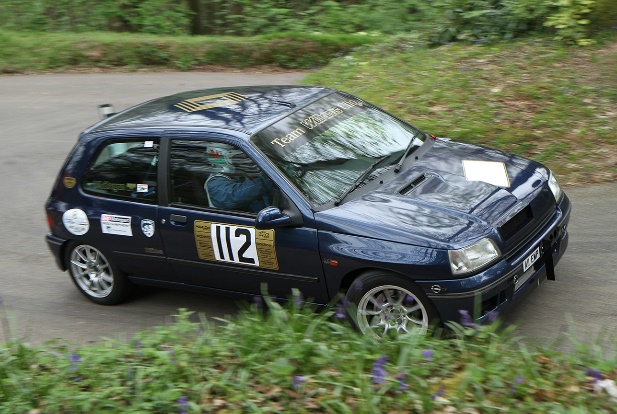 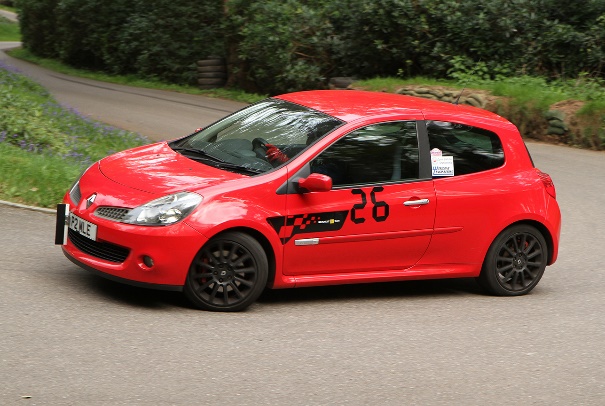 In the Roadgoing Specialist Production Cars we only had the one entry which was namely Mark Jago in his Dutton Melos, a smaller class of cars this time, but a very challenging class of cars.  Mark finished the day with a 47.65 and came 3rd in class.

The Modified Production Cars were next up the hill and in the 1800cc up to 2600cc we saw Paul Meadows battle it out in a very competitive class, resulting in him getting an impressive time of 48.62. 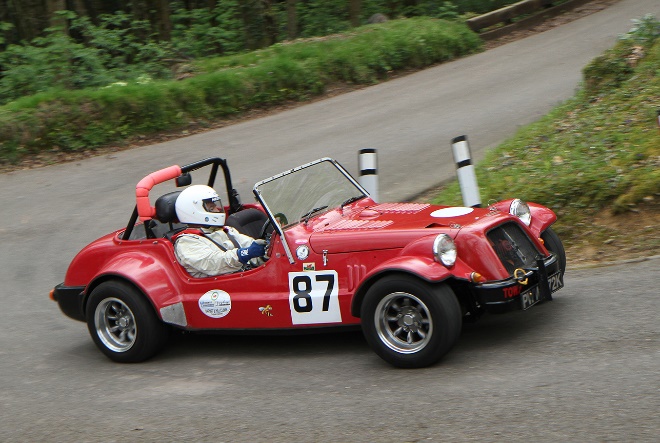 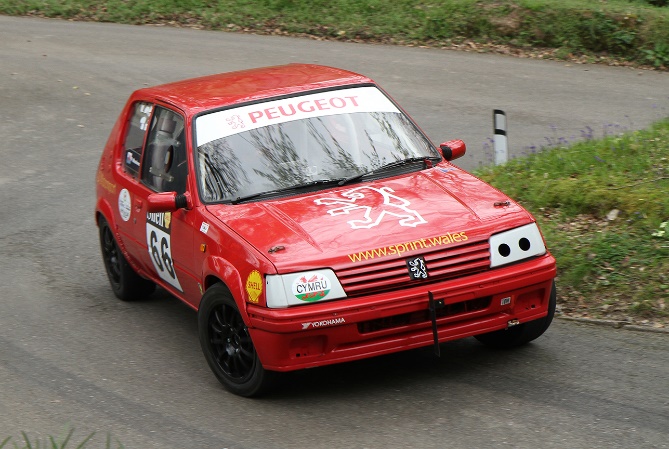 Last of the Road cars was our very own Alison Lock, in her BL Mini.  Alison was the only Rally Car to have entered the class and improved by over 5 seconds, from her morning Practice run to her last Timed run, resulting a time of 55.54. 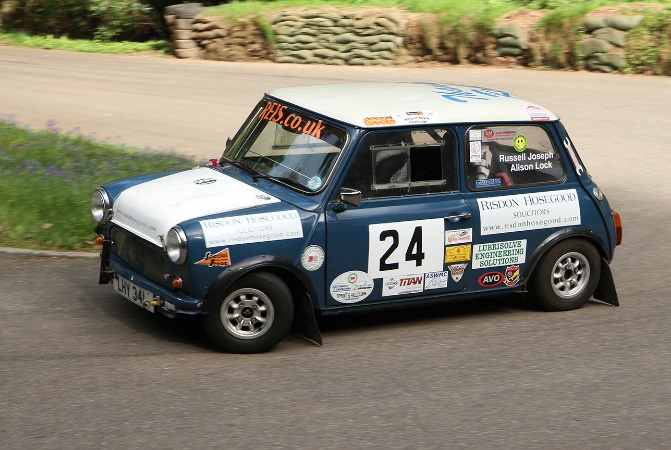 The sunshine continue and the day proved to be one of improvements for many of the drivers.

Martyn Davies in his Fiesta proved that the day before was simply a start of things to come, by beating his previous day’s timed run and also the Championship Target time set by Huw Turner in 2015 (who won the Trident Championship in 2014).  Martyn achieved a timed run of 47.96, setting a new target time for 2018.  Once again a trophy for 1st in Class made it way home to Abergavenny.  Unfortunately Rebekah was not able to mirror Martyn’s day, not managing to improve on her previous day's time, but still a great time of 55.66 for her and her Lupo on the second day.

And so with bated breath we wait for the Roadgoing Series Production cars over 1800cc to 2600cc to see if the tables would be turned, between Rob Thomson and Gary Morgan, having battled it out the day before. 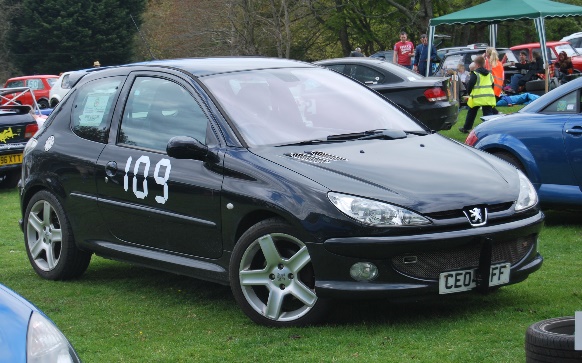 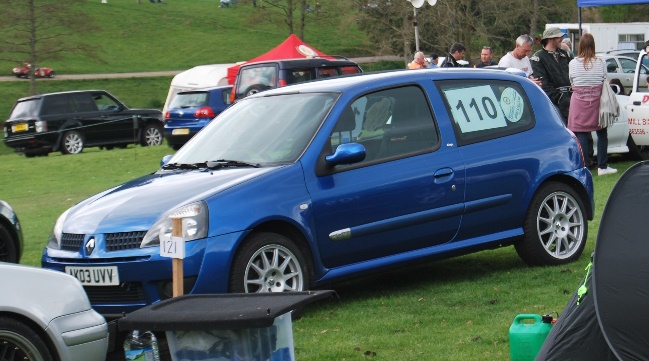 This time we saw Rob taking the lead on the practice runs with Gary hard on Rob’s tail, followed by Lyndon and Wynne Morgan.  As if there wasn’t enough nail biting going on, both produced a first timed run of 49.56 !  all to play for on the last time run of the day.  A similar battle was being played out between Lyndon and Wynne on their timed runs, with Lyndon finishing the day with a 50.00 and Wynne subsequently with a 50.37, which means a new Target time for Class 1B for 2018.  Garry finished the day on 49.56 which was an improvement on the day before, but Rob managed to get down to a time of 48.88, resulting in a new Target time for 2018 for class SC2 as well. 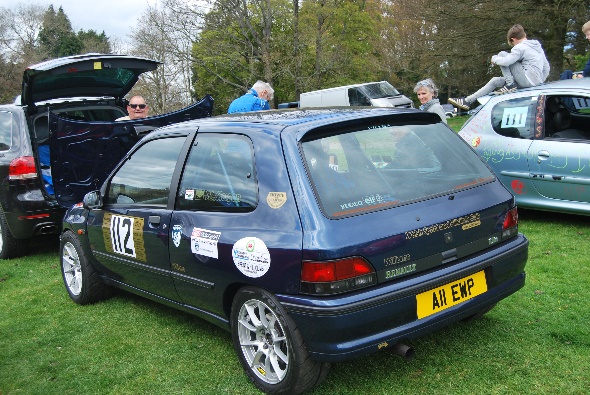 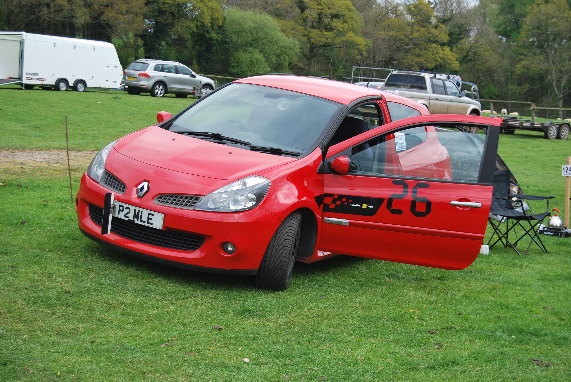 Unfortunately Mark Jago’s Dutton Melos experienced some mechanical/fuel issues and after a practice run had to retire the car, so no possibility of beating the time set the day before.

Having got close to the Target Time the day before, Paul Meadows in his Peugeot set out in amongst the Modified Production Cars over 1800cc to 2600cc to achieve his goal and managed to do so on his first timed run, setting a new Target time of 48.27 for Class 3B in Trident Championship.  Unfortunately a Red Flag hampered any improvement on the second time run, and was unable to get the momentum back to improve any further on his re-run.  A great way result all round. 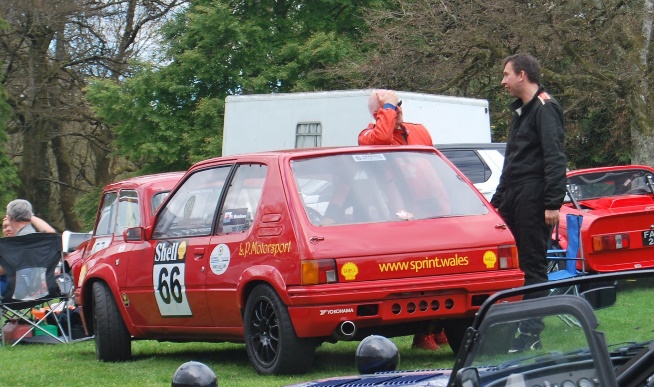 Once again Alison Lock proved that given the right weather conditions a double header can work wonders on improving ones times, and achieved a faultless time of 53.95 in her BL Mini. 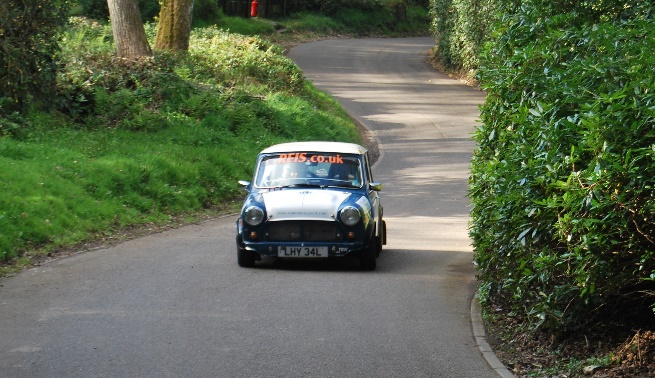 And so the season begins with a dry and sunny day at Castle Combe for seven contenders of the Championship.  The morning started with all seven taking part in the practice, with six contenders being confirmed as full entries with Wynne Morgan listed on a long reserve list.  After the morning practice run, following a number of withdrawals due to mechanical failures, Wynne was fortunately enough to be given an entry, so seven Championship contenders took to the track for their timed run after lunch.

The day started with the Roadgoing Series Production Cars up to 1400cc, and in amongst a class of five, Martin Davies proved to be a great contender in his Ford Fiesta, achieving 2nd in class at the end of the day. 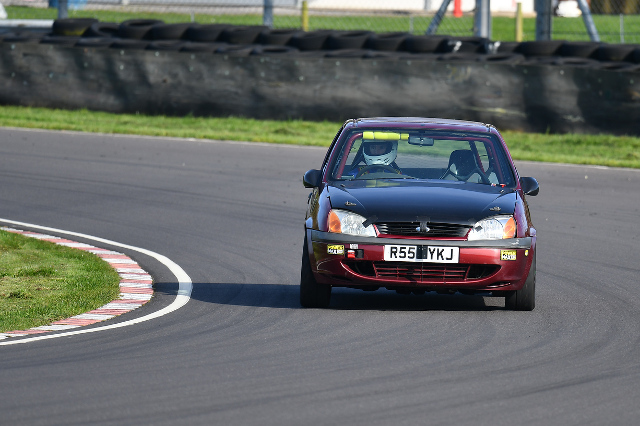 In the Roadgoing Series Production Cars 1800cc up to 2600cc, we saw 3 championship contenders battle it out in amongst a large group of 10 cars, Wynne Morgan in his Renault Williams Clio and Efion Jones and his daughter Sioned, double driving their Audi S3 Quattro.  At the end of the day Wynne finished with a 167.95, with Eifion achieving a 171.60 followed by Sioned with a 194.11.  Sioned improved on each and every run, resulting in an improvement of just over 17seconds between her practice and last timed run. 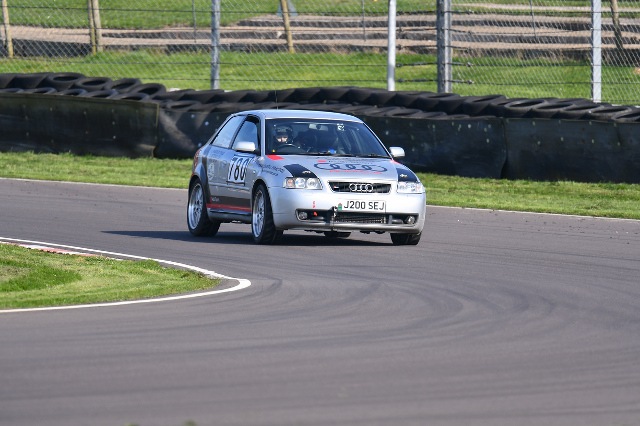 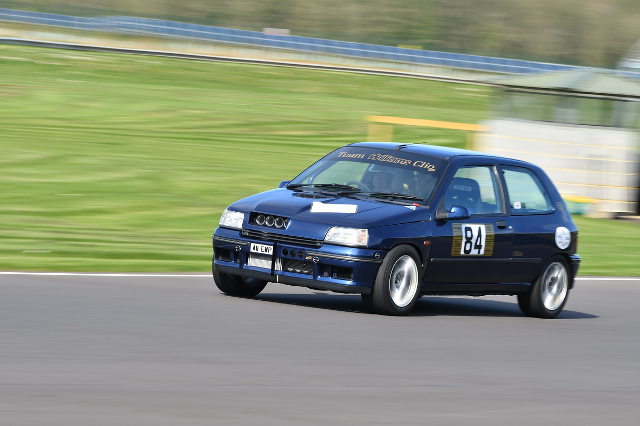 In the Rally Car class we saw Alison Lock in her 1380cc BL Mini compete against a Seat Ibiza 2lt, unfortunately Alison experienced some mechanical issued but managed to get a timed run in (198.06) 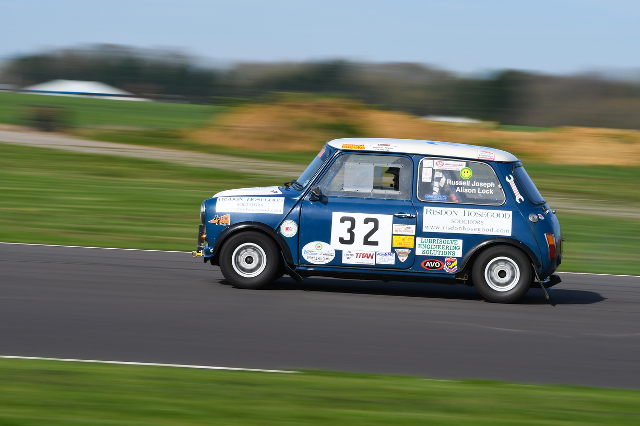 Last but not least we saw a selection of Clio’s sprinting around the track with our very own 2016 Championship Winner Andrew Bisping, amongst the mix, in his Clio 200.  Also in the class with Andrew, was a new championship contender Rob Thomson in his Renault Clio 172 Cup.  Andrew achieved a time of 163.55 with Rob finishing second in class with a 161.38 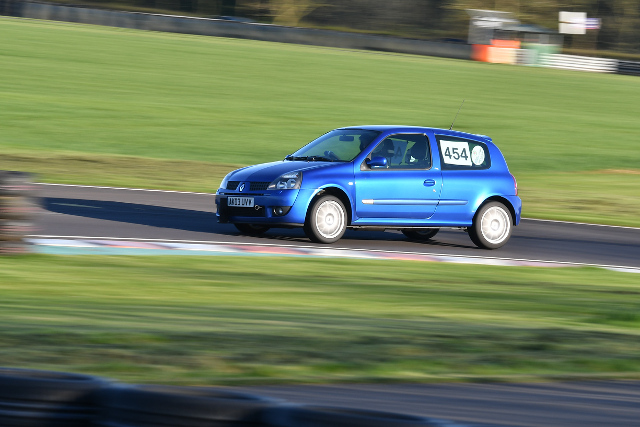 Fine dry weather continued to follow the Championship to Rockingham for the 2nd sprint event of the calendar.

During the drivers briefing, the 110 competitors were informed that our very own BARC Mids organiser Noreen Ward would not be present due to ill-health.  All were glad to hear that she was home, and on the mend.  A group photo was taken to send along with each and everyone’s best wishes for a speedy recovery.

Only one contender made their way to Rockingham having competed the day before at Castle Combe, namely Wynne Morgan in his well-presented Williams Clio.  In a class of over 13 cars, Wynne put in a respectable time of 89.21, setting a target time for the championship. 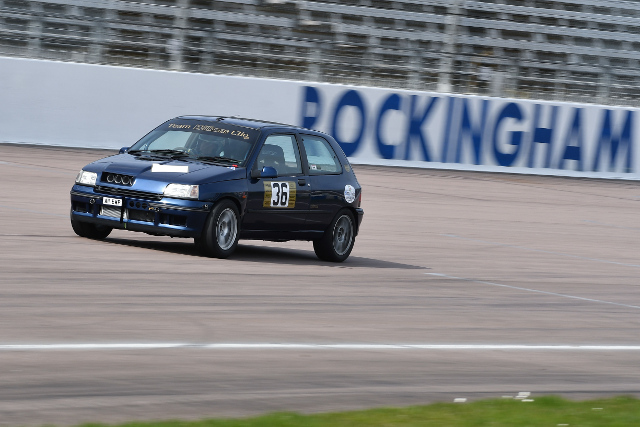 Less than two weeks after collecting her Trident Engineering Sprint & Hillclimb Ladies Championship Trophy, at the WAMC Awards evening at the end of January, Charlotte Phelps collected another trophy on Saturday from the British Women Racing Drivers Club having accumulated her points whilst competing at championship events around the UK, resulting in great 2016 season. 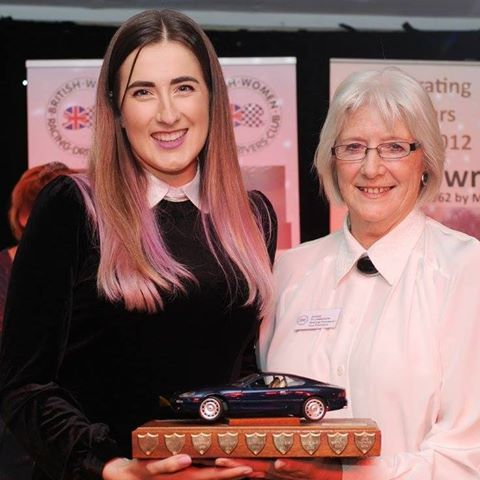