And so back to the hills after a wet/dry sprint around Pembrey, to our second double header of the month.

Once again a mixed bag of weather with rain all day on Saturday, but a little dryer on Sunday with rain at times.

Rebekah (and Dora) back to their usual running order competing in the Standard Series Production Car class up to 1400cc were the first to set up the hill. Unfortunately Rebekah was the only one in the class, but pushed both herself and Dora in each and every run, starting with a practice run of 88.16 and finishing with a timed run of 83.23, getting within 0.77s of Martin Davies’ target time of 82.46 set last year. A great result, and a deservedly Class Win. 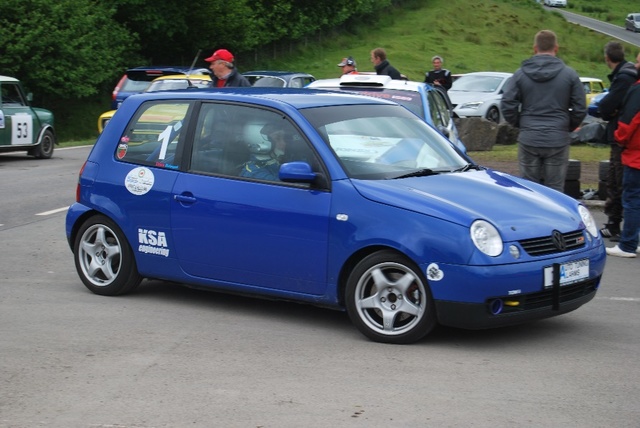 Next was Standard Series Production cars over 2001cc and out of a class of three cars, all were Championship Contenders, namely Ben Burggraaf, Gordon Hick and Anthony Bailey. 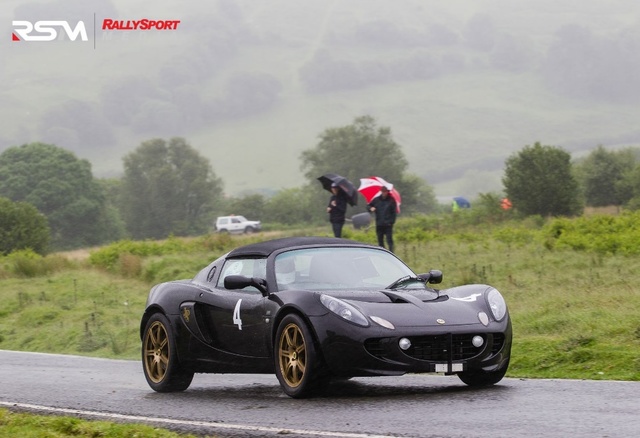 Not quite certain of how the classification of cars were chosen this weekend, but we saw Mike Hall in his Renault Clio Cup 172 placed in the Road going Specialist production cars over 1700cc ! alongside Eifion and Sioned in their Audi Quatro S3 !

Having done is his first sprint at Pembrey last week, Mike took to the hill, like a duck to water, which is fortunate, as there was plenty of water to contend with during the day. Starting practice with a competitive time of 77.49 having never done a hillclimb before, Mike ended the day with an impressive time of 75.06 and a Class Win. Eifion and Sioned double driving their Audi Quattro A3 also improved throughout the day, with Eifion getting down to a time of 78.82 on his last run of the day, followed by Sioned on 82.48.

In the Modified Production Cars 1401cc up to 2000cc, which consisted of 5 cars, we had four championship contenders competing for podium places. 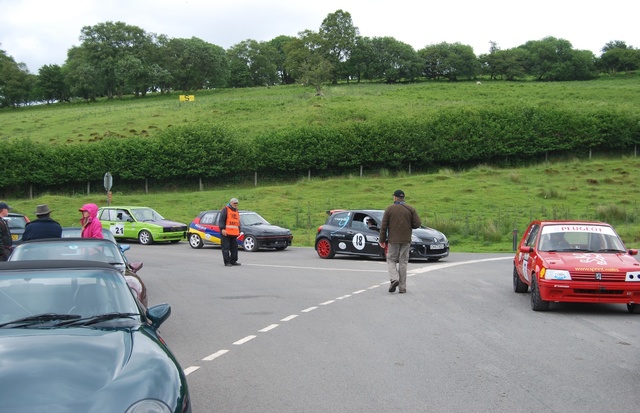 Lloyd in his Peugeot 106 set the bench mark for the class, with a P1 time of 73.05 with Dave Mockford (a new championship contender) in his lime green MG Maestro fighting it out for second place with Paul Meadows, followed by Frank Lyndsay Harries in his immaculate Renault Clio 197 Sport for fourth. The day ended with Lloyd achieving a timed run of 71.68 securing first in class, followed by Dave for 2nd in class on a timed run of 74.40, third place to Paul 74.52, with Frank taking fourth on 75.66.

And so to Martyn Ferris who was placed in the Modified Production Cars over 2001cc alongside a Ford Escort Mexico Mk1. Martyn having his work cut out competing against a powerful 3lt Millington Engine, managed to not only secure 1st in class but also achieve a great timed run of 70.12. 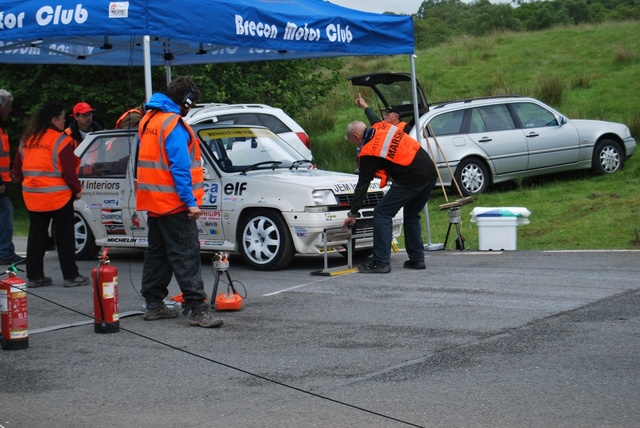 Following on from the Modified Production cars was the Specialist Modified Production Car Class up to 1400cc. Once again another Father and Daughter challenge within the class, with Charlotte Phelps double driving their family Westfield Megabusa with Dad; John Phelps. Not only did Charlotte get down to a sterling time 67.88 on here second timed run, but she also finished the day in amongst the top 10 drivers of the day and whilst on a fun run recorded a time of 67.18 ! 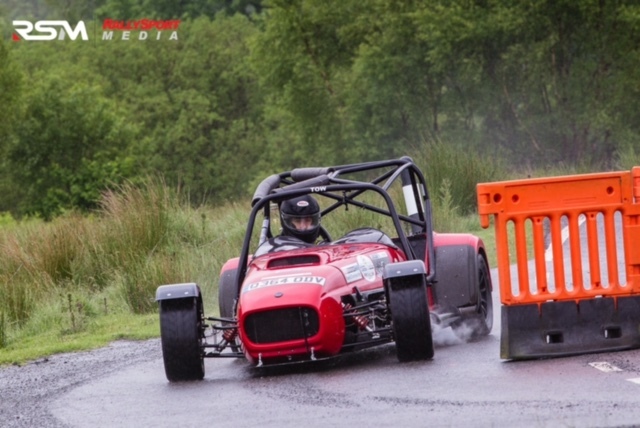 In the Sports Libre Car Class over 2001cc was a lonely Honda CRX driven by Lyndon Evans. Still a few developments to implement, but finished enough to not only do the Epynt hillclimb, but travel home each evening to Merthyr Tydfil. A clutch issue meant that Lyndon had to conserve the car and therefore only did one time run. Having had two practice runs, Lyndon recorded a time run of 94.22 on T1 and retired the car for T2, giving him the opportunity to not only get home but to save the car for the following day. 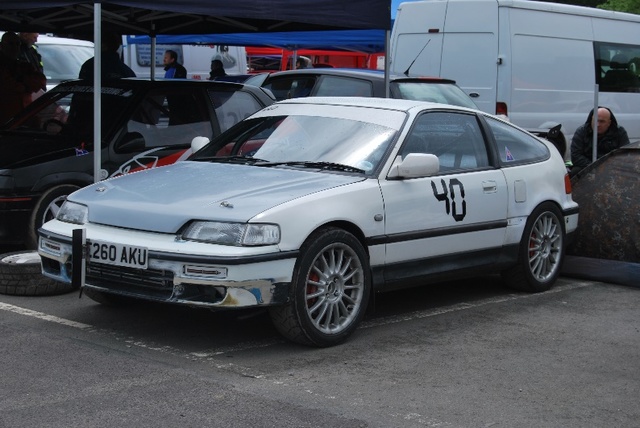 Following on from Lyndon, we saw Andrew Bisping and Gary Morgan in the Standard Car class 1401cc – 2000cc. Both Andrew and Gary started off with some great times, Andrew got a 73.22 in P1 and Gary not far behind on a 74.86, unfortunately when it came to timed runs neither Andrew or Gary managed to replicate the practice times and had to settle for slightly slower times in the afternoon, but still a podium finish for both drivers. Andrew secured 1st in class with a 74.78 and Gary 2nd in class with a 76.35. 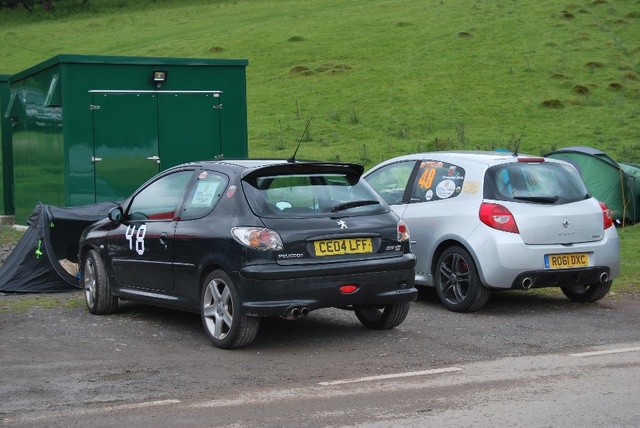 And so everyone reconvened for a second day of runs, with a fine mix of rain. 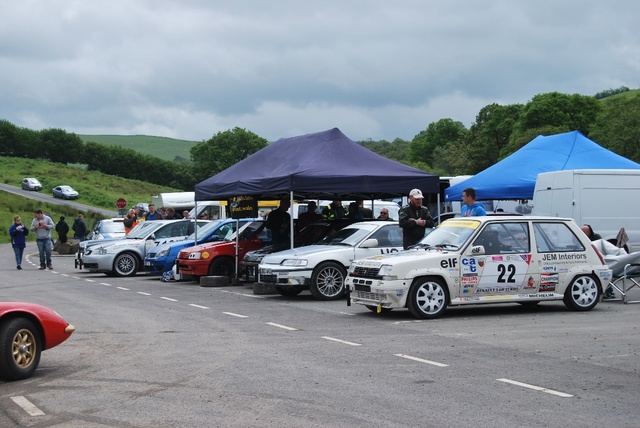 Rebekah and Dora continued from where they left off the day before with a first practice time of 83.16 and with each and every run improved, finishing on a time of 80.17 which resulted in a new target time for Championship Class 1A for 2018, and once again a 1st in Class trophy to take home. 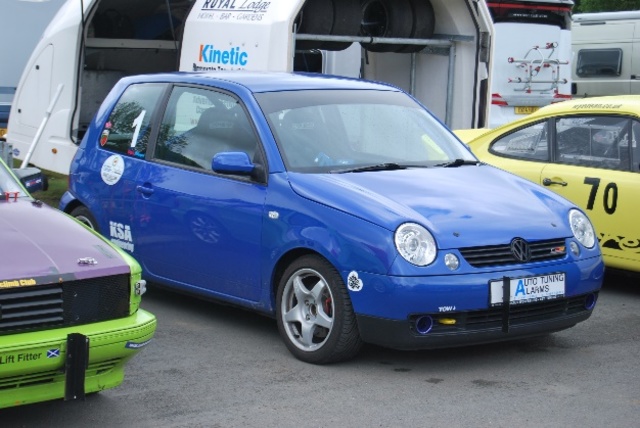 Similar to Rebekah, Gordon and Anthony kicked off with a practice time quicker than the day before in the Standard Series Production cars over 2001cc, resulting in Gordon in his Seat Leon getting down to a time run of 68.15, securing a 1st in Class, followed closely by Anthony taking 2nd in class with a timed run of 69.47 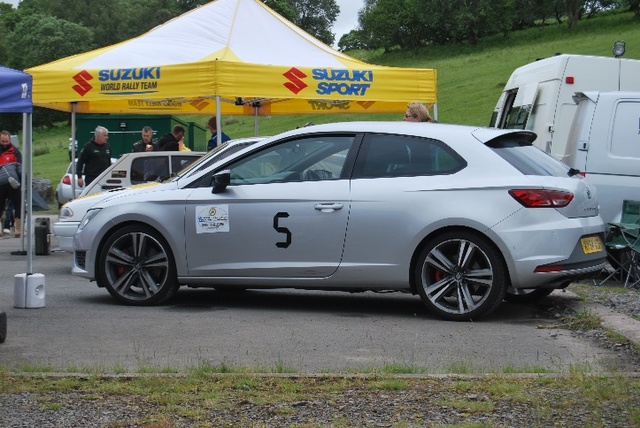 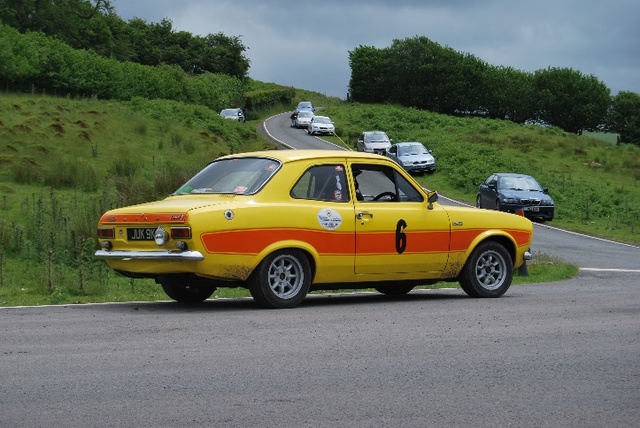 Once again, Mike, Eifion and Sioned were placed in the Road going Specialist Production cars over 1700cc, with Mike taking the lead in his Renault Clio Cup 172, followed by Eifion and Sioned double driving their Audi A3 Quattro. Mike finished 1st in class on a time of 70.41, with Eifion securing 2nd place with a time of 73.73 followed by Sioned on 76.39 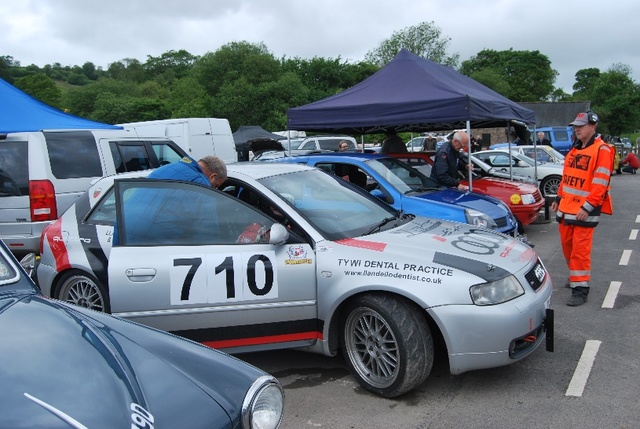 Modified Production Cars 1401cc up to 2000cc, saw five championship contenders running in a class of 7, with the inclusion of Martyn Ferris in his Renault 5 GT and a Westfield that were in different classes the day before. Martyn secured 2nd in class with a timed run of 67.89, followed by Dave Mockford for 3rd in class with a time of 69.52, resulting in Lloyd having to settle for 4th by a narrow margin, having achieved a timed run of 69.54 ! Frank Harries in his Renault Clio 197 Sport secured a time of 70.79 with Paul recording a timed run of 71.73 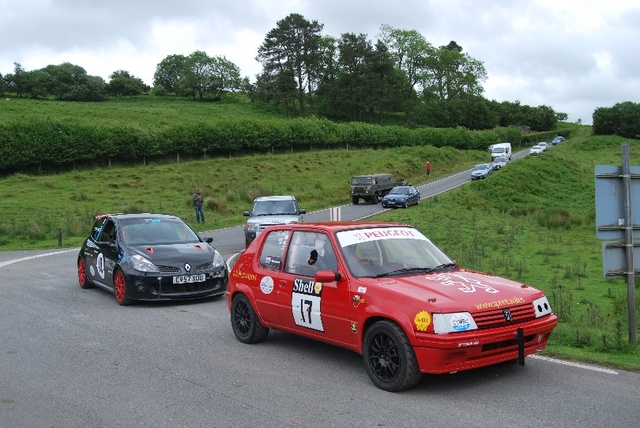 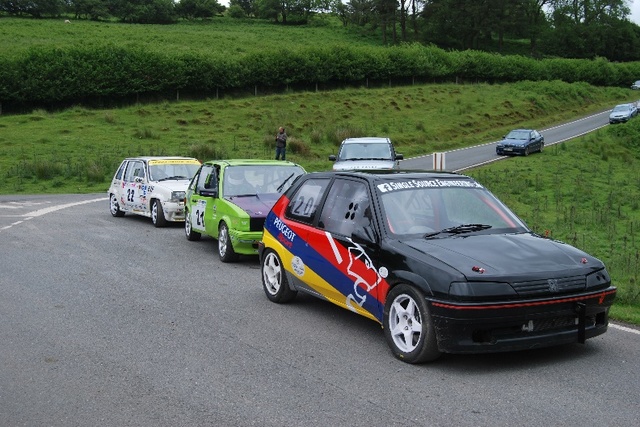 Joining Charlotte and John Phelps in the Modified Specialist Production Car Class up to 1400cc was the current Hill Record Holder, Simon Rogers in his Caterham Hayabusa. Simon set the hill record back in 2014 (54.55) and managed to break his record by recording a timed run of 54.54 on his last run of the day ! Charlotte had to contend with a failed starter solenoid, fuel pump issues and 2nd gear selection problems, and through all of this she recorded a time of 62.51, securing once again her place amongst the top 10 cars. 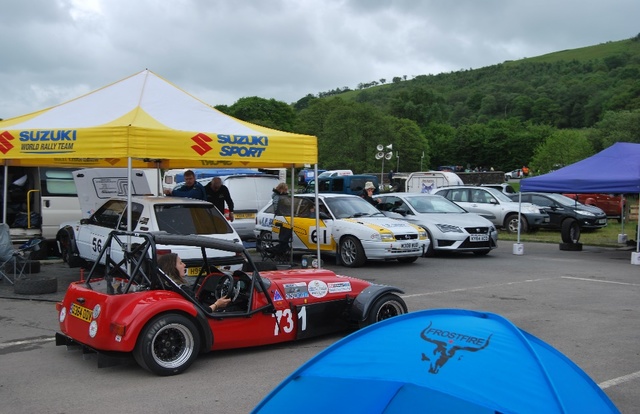 Lyndon in his Honda CRX only completed one Practice and one timed run in order to preserve his clutch, recording a time of 89s, just over 4 seconds quicker than the previous day. 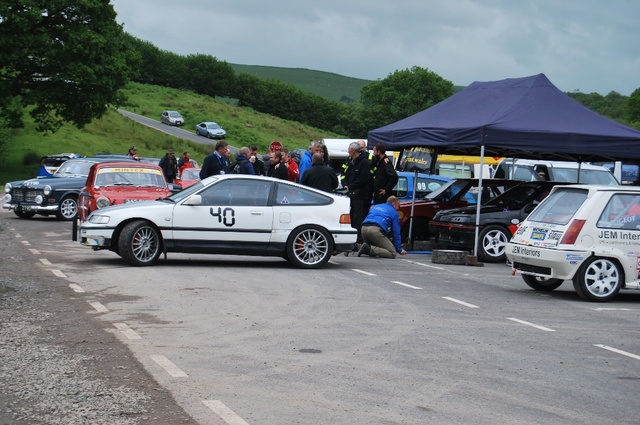 And so to Standard Cars 1400cc to 2000cc with Andrew Bisping and Gary Morgan battling it out for 1st in class. Andrew recorded a first timed run of 71.24 with Gary hot on his tail with a 71.97. Andrew’s second time run was a second slower with a T2 time of 72.39, but unfortunately for Gary he was also unable to improve on his first time, recording a second time of 72.51. So the class position was to be settled on both T1 times, with Andrew taking the class win on 71.24 in his Renault Clio and Gary a close 2nd in his Pegeout 206 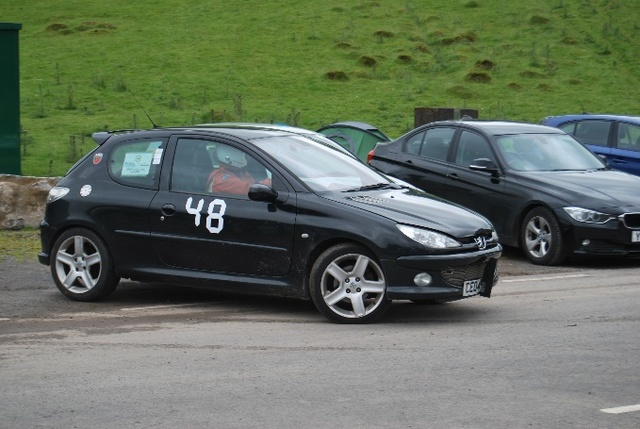 Next on the Calendar is Shelsley, one of the oldest motorsport venues in the world, to still run events on the original course.